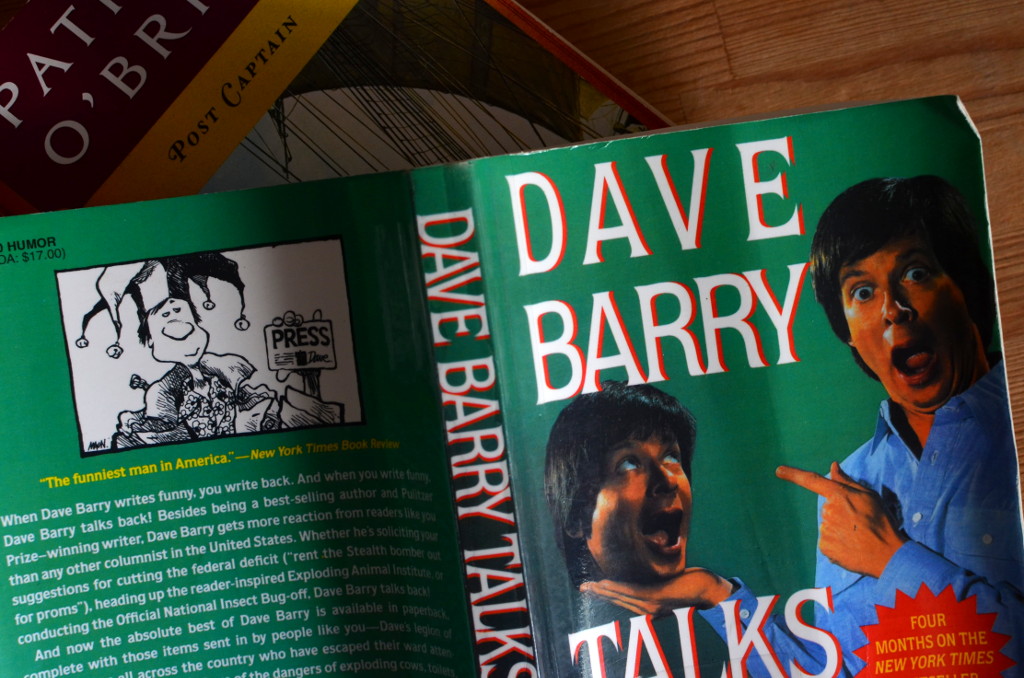 One of the gems that I discovered when I first started surfing the Internet was Dave Barry. Countless hours of my life have been spent reading the archives of his hilarious Florida articles written for the Miami Herald. Considering the amount of pure happiness (and tummy ache) his writing has given me, those were probably the most well-spent hours of my life. When I recently discovered that he has many books to his credit I had to get started on it!

Dave Barry Talks Back is a collection of 63 old articles, from before 1992. I was pleased to discover that I had not previously read any of these. They sample all the zaniness on this planet, ranging from relationships to family to pets to government to politics. Since these were written for a newspaper with a strict word limit, each of them is just 3 pages long. You can get shots of the funnies all through the day by picking up this book!

Dave Barry is the real deal because the observations he makes about us are genuine. Something else clearly stood out: the world of 1980s was just as insane as our world today. The same ineptness and bungling by government departments, the same weaselly politicians and most importantly, the same crazy real-life events involving the common man that keep happening around the world!

Except for a couple of dull pieces at the beginning and at the end, it is hard to find fault in this collection. As an icing, each article has a pertinent cartoon, drawn by Jeff MacNelly, another of my favorites. Much like Calvin and Hobbes or Seinfeld, to me Dave Barry's writings are epic. Beware of where you read this book cause you will not be able to control your snickering and giggling. This is a fantastic mood lifter from probably the funniest writer in USA.

From the article Skivvying up the profits:

Recently — I bet this has happened to you — I ran out of clean underwear in Los Angeles. So I wandered into the men's clothing department of an upscale department store, the kind of store where the salesclerks all have sharp haircuts and perfectly tailored suits that are far nicer than anything YOU own, and, although they act very deferential, you know they're secretly watching to see which clothes you touch so they can have them burned later as a precaution against vermin.

So I was skulking around, looking for the underwear section, and I came across the Ralph Lauren Exhibit, which, in addition to clothes, featured an old saddle, croquet mallets, and various other props associated with rich people. Ralph uses these to create a fashion look that has made him several zillion dollars, a look that I would describe as "Wealthy Constipated WASP." His magazine advertisements feature Lauren-clad people with their hair slicked back, standing around in large antique-infested houses, looking grim, as if they have just received the tragic news that one of their key polo ponies had injured itself trampling a servant to death and would be unavailable for an important match.

From the article Yellow Journalism:

Dogs need to sniff the ground; it's how they keep abreast of current events. The ground is a giant dog newspaper, containing all kinds of late-breaking dog news items, which, if they are especially urgent, are often continued in the next yard. We live next to an aircraft-carrier-sized dog named Bear, who is constantly committing acts of prize-winning journalism around the neighborhood, and my dogs are major fans of his work. Each morning, while I am shouting commands at them, they race around and scrutinize the most recent installments of the ongoing Bear oeuvre, vibrating their bodies ecstatically to communicate their critical comments ("Bear has done it AGAIN!" "This is CLASSIC Bear!" etc.).