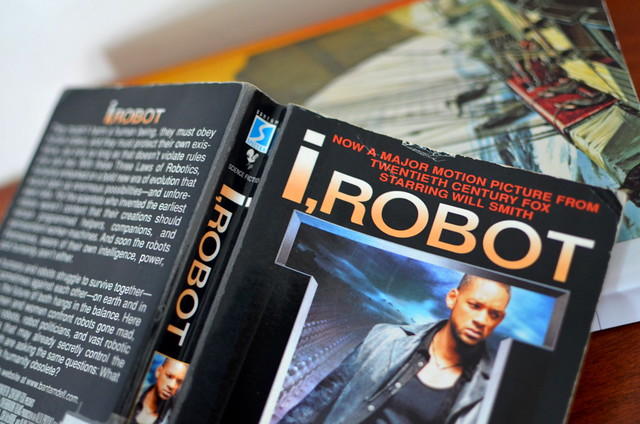 It did not take too long into I, Robot for me to realize why it went far beyond every other science fiction book I had read. Isaac Asimov fails miserably in convincing the 21st century reader about the mechanics and the so called positronic brain of his futuristic robots. In fact, he does not even try. However, that does not matter because the 9 short stories in this book explore something quite extraordinary: robopsychology, the analysis of the thinking and behavior of robots governed by the Three Laws of Robotics. Published in science fiction magazines between 1940 and 1950, these stories span the lifetime of the prime character, a Dr. Susan Calvin, a robopsychologist at U.S. Robots and Mechanical Men. In each of these stories, Susan recalls an interesting problem or dilemma faced in robot-human interaction.

The stories are in chronological order of their timeline, starting off with simple robots used as nannies or servants at home. Due to social pressure, initially US Robots is not allowed to sell robots for employment on Earth. Instead they sell them for mining and maintenance tasks on asteroids, planets and spaceships. In these environments, typically some anomaly in robot behavior is observed. And by analysing the complex interplay between the three Laws of Robotics, the solution is figured out. Each of these is a clever puzzle that I felt highly relevant even today. In fact, I could easily analogize each into a real-time system or multi-threading or such computer science problem of today.

Towards the end of Susan's life, in her last few stories, we are finally served robots on Earth, that are so intelligent that they run entire corporations or parts of Earth. With Asimov, the robot situation is never dystopian, like in Hollywood movies, thanks to the first Law of Robotics: a robot should not harm a human. Asimov really stretches imagination with the Machine, which acts as a benevolent administrator to hundreds of millions of humans. In this final story, I also see fragments of today's Internet, search engines and the all-pervasive machine learning algorithms that we use with abandon.

These stories encompass new dimensions of vision and thinking about robots and our possible future life with them. It came as no surprise when I learnt that the term robotics itself was created by Asimov! The prose here is spare and elegant and the book is surprisingly easy to read considering its subject matter. Needles to say that I, Robot is a great introduction to Asimov and his Robot series and is a must read!

PS: The cover of the edition I read had this terrible Will Smith photo from his movie of the same name. (I have seen that atrocious movie and it has zero influence from this book.) It is quite pathetic how these book publishers are ready to make such vulgar covers of timeless classics, all for a quick buck!

The premise of the stories, not dystopian, but robots as our best hope:

Then you don’t remember a world without robots. There was a time when humanity faced the universe alone and without a friend. Now he has creatures to help him; stronger creatures than himself, more faithful, more useful, and absolutely devoted to him. Mankind is no longer alone.

A robot explaining why it believes it could not have been created by man:

Look at you! The material you are made of is soft and flabby, lacking endurance and strength, depending for energy upon the inefficient oxidation of organic material. Periodically you pass into a coma and the least variation in temperature, air pressure, humidity, or radiation intensity impairs your efficiency. You are makeshift.

I, on the other hand, am a finished product. I absorb electrical energy directly and utilize it with an almost one hundred percent efficiency. I am composed of strong metal, am continuously conscious, and can stand extremes of environment easily. These are facts which, with the self-evident proposition that no being can create another being superior to itself, smashes your silly hypothesis to nothing.

Dr. Susan explains why a robot is indistinguishable from a good human:

If you stop to think of it, the three Rules of Robotics are the essential guiding principles of a good many of the world’s ethical systems. Of course, every human being is supposed to have the instinct of self-preservation. That’s Rule Three to a robot. Also every ‘good’ human being, with a social conscience and a sense of responsibility, is supposed to defer to proper authority; to listen to his doctor, his boss, his government, his psychiatrist, his fellow man; to obey laws, to follow rules, to conform to custom – even when they interfere with his comfort or his safety. That’s Rule Two to a robot. Also, every ‘good’ human being is supposed to love others as himself, protect his fellow man, risk his life to save another. That’s Rule One to a robot. To put it simply – if Byerley follows all the Rules of Robotics, he may be a robot, and may simply be a very good man.

The Sisyphean nature of violence in human history:

Every period of human development, [...] has had its own particular type of human conflict – its own variety of problem that, apparently, could be settled only by force. And each time, frustratingly enough, force never really settled the problem. Instead, it persisted through a series of conflicts, then vanished of itself, – what’s the expression, – ah, yes ‘not with a bang, but a whimper,’ as the economic and social environment changed. And then, new problems, and a new series of wars, – apparently endlessly cyclic.

The real point of the matter is that what we call a ‘wrong datum’ is one which is inconsistent with all other known data. It is our only criterion of right and wrong. It is the Machine’s as well. Order it for instance, to direct agricultural activity on the basis of an average July temperature in Iowa of 57 degrees Fahrenheit. It won’t accept that. It will not give an answer. – Not that it has any prejudice against that particular temperature, or that an answer is impossible; but because, in the light of all the other data fed it over a period of years, it knows that the probability of an average July temperature of 57 is virtually nil. It rejects that datum.