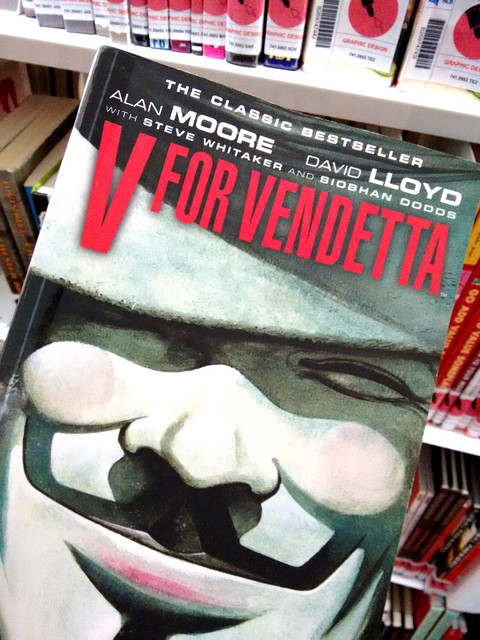 The reason The Dark Knight is an epic film to me is not Christian Bale's Batman, but Heath Ledger's eponymous Joker. It is hard to call him a classic villain since he is the one who asks the hard questions and creates interesting moral dilemmas. It is that Joker I was repeatedly reminded of in V for Vendetta, the now-famous graphic novel from the duo of Alan Moore and David Lloyd. Published in 1988, it depicts a grim totalitarian regime in the near future of 1997 for England. There is a Leader who keeps a tight lid on the citizens in Big Brother style using CCTV, phone tapping, propaganda and police, creatively named the Eye, Ear, Mouth and Finger departments. Starting from Guy Fawkes Day of that year, a mysterious vigilante saves an innocent girl from the regime's henchmen, starts killing the regime's leaders and bombing their centers in London. Thus begins a cat and mouse game between the regime that is hell-bent on catching the killer and he in destroying their grip over the people.

Much like in Watchmen, Alan Moore's vision of a dystopian world, its rulers and the character of V in a Guy Fawkes costume is brilliant. David Lloyd's art is fantastic, with most panels in dark shadows, conveying the depressing mood of the story. The coloring is a letdown though, reminding me of cheap comics. This might be technical issue, maybe good inking was expensive or unavailable to the creators?

The novel is divided into 3 books, with the first two being quite riveting. It is the last book that was disappointing. In this climactic stretch, the plot literally flails around tied to a V who turns out to be increasingly psychotic. The Leader too is weakened in an unbelievably lame manner. More troubling is how lackadaisical the plot is to the plight of a society which falls into full blown anarchy.

The version of V for Vendetta I read had a section at the end where Alan Moore explains candidly how he and David Lloyd came about to create the story, characters and art of this novel. It was quite refreshing to learn that even for masters like this duo, creation is a very messy and confusing process where slowly enough things stick to the wall and take shape. The book also had various draft sketches and artwork created for this series. This section is a must read, if you ever pick up this book.

The Leader justifies his rule:

The Romans invented fascism. A bundle of bound twigs was its symbol. One twig could be broken. A bundle would prevail. Fascism ... strength in unity. I believe in strength. I believe in unity. And if that strength, that unity of purpose, demands a uniformity of thought, word and deed then so be it. I will not hear talk of freedom. I will not hear talk of individual liberty. They are luxuries. I do not believe in luxuries. The war put paid to luxury. The war put paid to freedom.

Authority, when first detecting chaos at its heels, will entertain the vilest schemes to saves its orderly facade. But always order without justice, without love or liberty, which cannot long postpone their world's descent into pandemonium. Authority allows two roles: the torturer and the tortured; twists people into joyless mannequins that fear and hate, while culture plunges into the abyss.