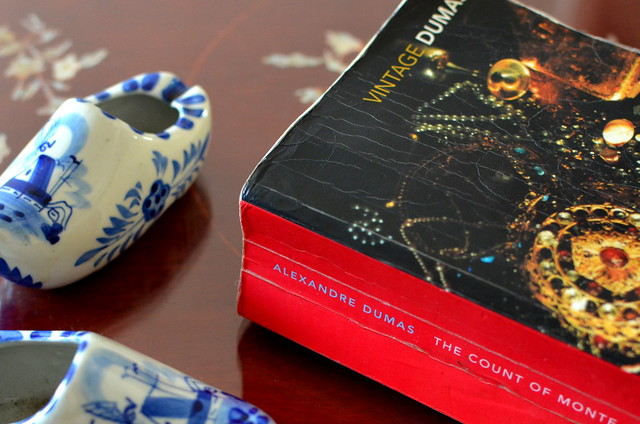 One of the thoughts that remained with me as I read The Count of Monte Cristo (Le Comte de Monte-Cristo) was about the reasons one should read classic novels. I used to think they were crusty works, popular in their day, but not relevant to our modern age. Night after night, as I greedily devoured this epic revenge saga by Alexandre Dumas, the power of a classic became obvious to me. Not only have humans been sophisticated in language for a long time now, as in evidence here, but this book was also a rude reminder that we have been an advanced civilization for many centuries now.

Published as five volumes in French in 1844, this historical fiction starts around 1800, when Napolean escaped from the island of Elba. As you might already know, it is the revenge saga of Edmond Dantes and is actually quite Biblical in its telling of the eventual win of Good over Evil. Dantes is falsely condemned to life imprisonment and loses his betrothed lover and lone father. After 14 years in a dungeon, when he had given up on life, Providence offers him a fantastic escape and a great treasure. He returns as the mysterious Count of Monte Cristo, fashions an extremely elaborate revenge plan that slowly tears apart the lives of the three people who destroyed his.

For a change it was refreshing to read a classic not centered around London, but around Paris, France and Italy. There is simply nothing much to complain: the plot is very intricate, the characters are unforgettable, the revenge is deliciously and slowly served. I read the unabridged original English translation, so the language, vocabulary and conversations are very old-fashioned and verbose, much like reading a Dickens. I actually prefer this, since it enables a more complete immersion of the reader in the world of 1800. The world and characters of Dumas are extremely detailed. Important historical events like Napoleon's escape and his Hundred Days reign, social change (French Revolution), new technologies (steamboat and telegraph), social etiquette, people punctual to the second for appointments, freedom of press, an impartial judicial system, stock trading, banking and interest rates, fashion, cuisines and cultures from around the world, all these play pivotal roles in the plot. I was truly humbled to witness this world in excruciating detail as the pages flew by.

The Vintage Classic publication I used had no images, but the ebook at Project Gutenberg has hundreds of original drawings by multiple artists that were used in its original publication. These show the settings and clothes of that era and enhance the reading a lot. I read the unabridged 1846 English translation, whose creator is actually anonymous! If you find the flowery language in this too old-fashioned for your taste, there is a 1996 translation by Robin Buss that is supposedly in a modern voice. There are many abridged versions of this book, anywhere from 200 to 400 to 800 pages long. I tried one of them and I recommend avoiding these! As in all creative works, it is best to go for the original language and voice of the creator.

At close to 1500 pages and five volumes in total, The Count of Monte Cristo is probably the biggest book I've read. It was quite effortless though. It took a few pages to get used to the language and I needed a dictionary for a few chapters to understand the old-world titles and objects that we no longer use. After that you get sucked in by Dantes' escape and it is a joy ride all the way to the end.

Words that appear very frequently in this translation:

Summary of the novel in Dantes' own words:

The most dreadful misfortunes, the most frightful sufferings, the abandonment of all those who loved me, the persecution of those who did not know me, formed the trials of my youth; when suddenly, from captivity, solitude, misery, I was restored to light and liberty, and became the possessor of a fortune so brilliant, so unbounded, so unheard-of, that I must have been blind not to be conscious that God had endowed me with it to work out his own great designs. From that time I looked upon this fortune as something confided to me for an especial purpose. Not a thought was given to a life which you once, Mercedes, had the power to render blissful; not one hour of peaceful calm was mine; but I felt myself driven on like an exterminating angel. Like adventurous captains about to embark on some enterprise full of danger, I laid in my provisions, I loaded my weapons, I collected every means of attack and defence; I inured my body to the most violent exercises, my soul to the bitterest trials; I taught my arm to slay, my eyes to behold excruciating sufferings, and my mouth to smile at the most horrid spectacles. Good-natured, confiding, and forgiving as I had been, I became revengeful, cunning, and wicked, or rather, immovable as fate. Then I launched out into the path that was opened to me. I overcame every obstacle, and reached the goal; but woe to those who stood in my pathway!

"To learn is not to know; there are the learners and the learned. Memory makes the one, philosophy the other." "But cannot one learn philosophy?" "Philosophy cannot be taught; it is the application of the sciences to truth; it is like the golden cloud in which the Messiah went up into heaven."

Quality of newspapers and ads back in 1800, just the same:

Albert threw himself on the divan, tore off the cover of two or three of the papers, looked at the theatre announcements, made a face seeing they gave an opera, and not a ballet; hunted vainly amongst the advertisements for a new tooth-powder of which he had heard, and threw down, one after the other, the three leading papers of Paris, muttering, "These papers become more and more stupid every day."

"Punctuality," said Monte Cristo, "is the politeness of kings, according to one of your sovereigns, I think; but it is not the same with travellers. However, I hope you will excuse the two or three seconds I am behindhand; five hundred leagues are not to be accomplished without some trouble, and especially in France, where, it seems, it is forbidden to beat the postilions."

Pulav, curry and other cuisines make an appearance:

"Did you know me better," returned the count, smiling, "you would not give one thought of such a thing for a traveller like myself, who has successively lived on maccaroni at Naples, polenta at Milan, olla podrida at Valencia, pilau at Constantinople, karrick in India, and swallows' nests in China. I eat everywhere, and of everything, only I eat but little; and to-day, that you reproach me with my want of appetite, is my day of appetite, for I have not eaten since yesterday morning."

Marriage in France vs. Italy:

"You must know that in France they are very particular on these points; it is not sufficient, as in Italy, to go to the priest and say, 'We love each other, and want you to marry us.' Marriage is a civil affair in France, and in order to marry in an orthodox manner you must have papers which undeniably establish your identity."

At half-past eight in the evening the grand salon, the gallery adjoining, and the three other drawing-rooms on the same floor, were filled with a perfumed crowd, who sympathized but little in the event, but who all participated in that love of being present wherever there is anything fresh to be seen. An Academician would say that the entertainments of the fashionable world are collections of flowers which attract inconstant butterflies, famished bees, and buzzing drones.

"Family griefs, or indeed any other affliction which would crush a man whose child was his only treasure, are endurable to a millionaire. Philosophers may well say, and practical men will always support the opinion, that money mitigates many trials; and if you admit the efficacy of this sovereign balm, you ought to be very easily consoled—you, the king of finance, the focus of immeasurable power."