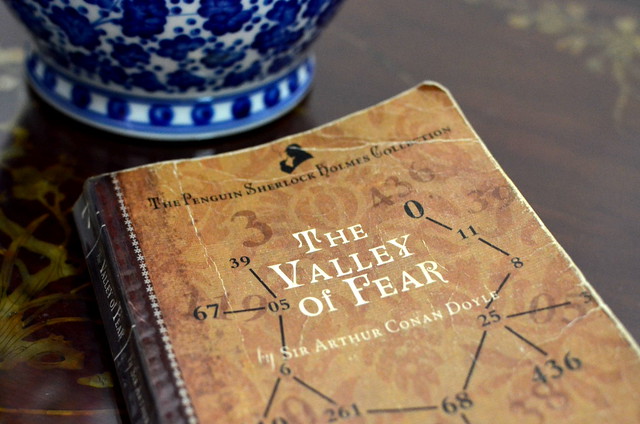 The Valley of Fear is the fourth and last Sherlock Holmes novel, one that I had not read before. Arthur Conan Doyle sets up a satisfying and familiar murder for Holmes to solve in the first half. The owner of a moated mansion has been blown to bits by a shotgun. The bridge over the moat around the house was drawn up and closed during the grisly act. Who is the murderer? Why did he murder and how did he escape unnoticed? A thrilling tale unravels as Holmes and Watson find the threads leading to the crook.

The second half of the book though is a tad disappointing. Even after the murderer is caught, Doyle pursues with his back-story. That follows an arc familiar from A Study in Scarlet: going back to a time when America was being explored. In the dark coal mining valley of Vermissa are a secret brotherhood who threaten and kill people to extract money. This murder emerges from a long vengeance from there that follows through across the pond to England. Doyle is an excellent storyteller, but it would have been nice to have a longer mystery without all the back-story.