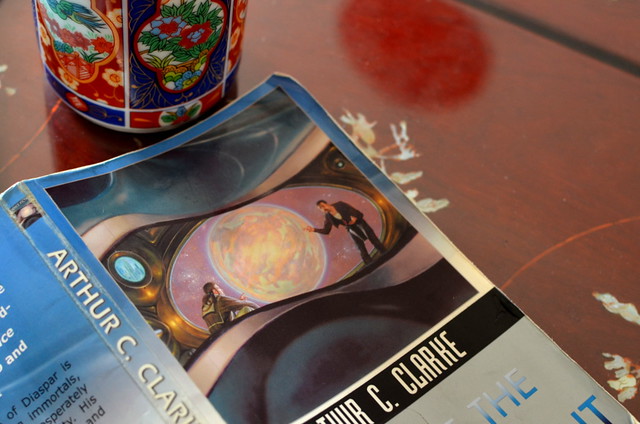 Against the Fall of Night is the most boringly titled, but refreshing, first novel of Arthur C. Clarke. Many millions of centuries of human history have passed, Earth is covered with deserts and a lone city remains named Diaspar. Technology and robotics have far exceeded imagination, humans are virtually immortal, but surprisingly they are meek and have no desire to explore new planets or Suns. Alvin, the youngest human born of Diaspar starts to get inquisitive about what lies outside the city. With the help of the Keeper of Records he goes on to discover relics of a thriving human past and how they came to be relegated to this miserable existence.

Originally written in 1948, this novella remains surprisingly imaginative and readable today. Despite its short length, the story touches upon a lot of interesting aspects: race, history, robots, computers, extra terrestrial intelligence and space exploration. Using a young Alvin as a plucky implacable explorer, the story is simply a lot of fun as seen from his eyes. I was constantly reminded of the original Star Wars movie and young Skywalker. Much like that movie, there are some entertaining instances of robot-human interactions. Against the Fall of Night is a short and lively page-turner.

“The trouble is,” said Rorden, “that there are no longer any engineers left in the world.”

Alvin looked puzzled: although contact with the Keeper of the Records had greatly enlarged his vocabulary, there were thousands of archaic words he did not understand.

“An engineer,” explained Rorden, “was a man who designed and built machines. It’s impossible for us to imagine an age without robots—but every machine in the world had to be invented at one time or other, and until the Master Robots were built they needed men to look after them. Once the machines could care for themselves, human engineers were no longer required. I think that’s a fairly accurate account, though of course it’s mostly guesswork. Every machine we possess existed at the beginning of our history, and many had disappeared long before it started.”

“Such as flyers and spaceships,” interjected Alvin.

“Yes,” agreed Rorden, “as well as the great communicators that could reach the stars. All these things vanished when they were no longer needed.”