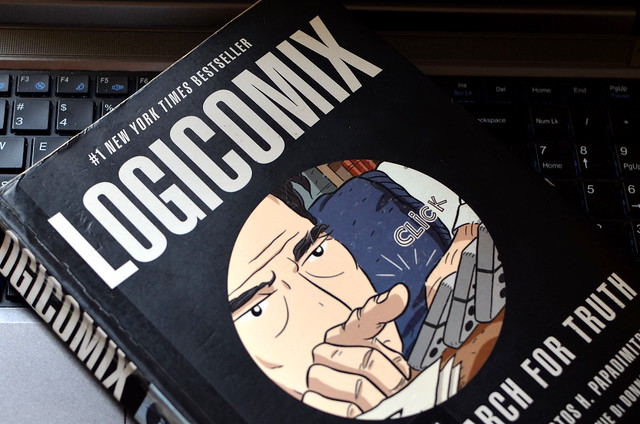 Logicomix, with a grand subtitle of An epic search for truth, is a graphic novel written by Apostolos Doxiadis and Christos Papadimitriou. In this book, the writers appear in the panels, chit-chat among themselves and narrate the story of the foundational quest in mathematics by using the biography of Bertrand Russell. A rowdy crowd of anti-war protesters is addressed by Russell, and then he goes on to narrate his life story in a bid to convince them to allow USA to enter World War 2. Most of the book then features Russell's quest for logic in math, but we keep stepping back to his speech and then back to the authors (chilling out in Athens) intermittently.

Philosopher Bertrand Russell turns out to have an interesting biography. Born with a silver spoon in his mouth he took to mathematics and philosophy. Finding the axiomatic foundations of mathematics to be quite shaky, he set out to formalize it with another mathematician named Whitehead writing Principia Mathematica (yes, they took the same title as Newton's epic). Using Russell's journeys and thoughts, the reader is introduced to Gregor Cantor (set theory), Boole (Boolean logic), Peano, Wittgenstein, Poincare, Godel, Turing, von Neumann and many other mathematicians. The novel goes all philosophical towards the end of its 344 page run, finishing with a Greek tragedy Oresteia and attempting to connect it to the subject matter.

Logicomix is one of those books that I wanted to love, but could not. The art by Alecos Papadatos and Annie Di Donna is very reminiscent of Hergé (The Adventures of Tintin) and it is quite fantastic. It was the prime reason I stuck to finishing the book. However, the writers on the other hand have too many goals: foundational quest, Russell's biography, predicate logic, gallery of mathematicians, all of this aimed at a layman reader. There is too much of Russell's personal life, laid out in soap opera style. The comics medium is wasted in large portions of the book, which are filled with just the head of Russell expounding something in a speech bubble. Some of the math portions like Russell's Paradox have been depicted well, but most of it aims too low or too high, never quite settling on what level of a reader it is meant for. There is too much chatter of the authors themselves in the panels, with their walks in Athens and the Greek play they are attending. The problem of all this is that they come off as self-important. If only the excellent artwork here could have been melded to a simple and straight plot aimed at a certain level of reader, Logicomix could have been a great read.