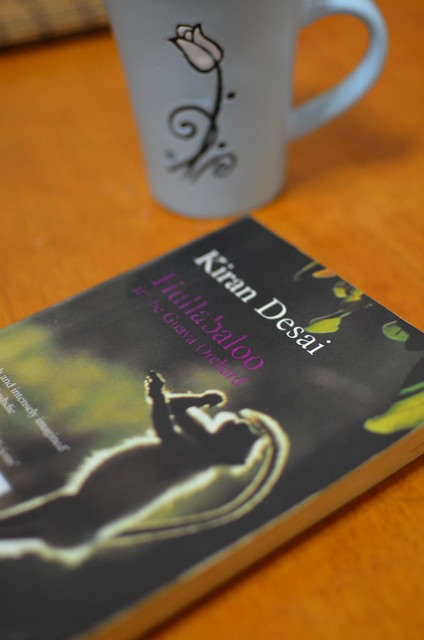 I first read Kiran Desai ages ago, when her second book The Inheritance of Loss won the Booker. I came upon her first book Hullabaloo in the Guava Orchard thanks to the doctor and decided to pick it up. As I got lost in the incredibly funny opening pages, I thanked myself that this was nothing like the dark tragic tale in her Booker winner. Hullabaloo is the story of dreamy Sampath and how he decides one day to take permanent residence up a guava tree outside his town of Shahkot. What follows is a whacky story that drags in his family, the townsfolk and finally a brood of monkeys.

At 200 pages, this turned out to be a short, but highly entertaining read. It is particularly endearing in the opening chapters, which introduce the Chawla family, the birth of Sampath and our first window into the lanes of Shahkot. The town and its residents reminded me most of English, August. You might be reminded a bit of RKN too, but the characters here are too funny and the setting too modern for his style. After an especially funny first half, the plot focuses on Sampath and his monkeys a bit too much in the latter half, without offering anything strong. Various weak threads seem to be created on a whim and are left hanging in the climax, where it seems like Desai just decided to end the book abruptly. Hullabaloo is a good read, delivers creative imagery, bountiful culinary aromas and loads of fun in a small package.

By the time the night watchman cycled past on his way home from the wealthy neighbourhood where he worked, Sampath was shaky on his feet from lack of sleep. Phee, pheee, phee - the watchman blew his whistle as if in a nasty attempt to awaken all those who might still be sleeping. Sampath watched as the shadows retreated, as Shahkot was offered up once again, whole and intact, with its overflowing rubbish heaps and its maze of streets. Bit by bit he saw the jumble of wires spilling out at the top of the electricity pole and the dirty, stained walls of the houses that rose high all about him, with their complications of rooftops and verandas; their clutter of television aerials, washing lines and courtyards filled with bicycles and raggedy plants and all the paraphernalia of loud and large families. The municipal water supply was turned on. From every kitchen and bathroom in Shahkot there was the sound of water pumps, thin streams of water dribbling into the first in a long line of buckets and pots and pans waiting to be filled. Sampath’s father appeared down below with his yoga mat. Women emerged from different houses, converging in their walk to the Mother Dairy booth, and the priests in the temple at the end of the road launched into song, their voices richer and stronger than Sampath’s, their hymns rising, undulating, soaring over the rooftops.