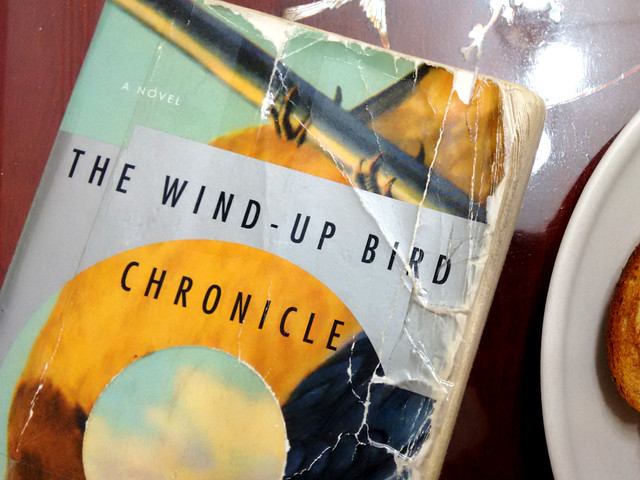 Most dreams are flimsy and connected in some way to something happening in real life. But there are the epic dreams, where I am but a feather on the breeze, carried on through inexplicable quests, all the while transfixed to the events, yet disconnected from it all. Reading The Wind-up Bird Chronicle felt like that kind of a deep fantasy. Sure, it starts off as a domestic story of Toru Okada and his wife Kumiko set in modern Tokyo. Their cat has not been home in many days and Kumiko asks her husband to look for it. The search turns out to take on many dimensions and slowly but surely enters the surreal. There is simply no point in going into the details of what happens, much like trying to recall the detailed happenings of a lifetime lived in a deep dream. What does happen is connections across time and space and across the real and the unreal.

The book is a long, but deeply satisfying read. I usually demand credibility from the stories I read. It is to the credit of the masterful storytelling by Haruki Murakami that I was helplessly transported along a tale that has no basis in reality. Over the past few weeks, I slowly slipped into the routine of reading the novel by the bed lamp before going to sleep. It does help that its chapters are short, the plot keeps chugging along and most of it is quite dream-like. It was only when there was less than 100 pages to go that I realized that there might be an ending after all and it does have a happy one thankfully.

The edition I read was translated to English by Jay Rubin. This version is supposedly much shorter than the original Japanese work, with many chapters also having been cut out. Would it have made a difference? I do not know. The descriptions read vividly like Japanese, though I did not like the few Americanisms thrown out in conversations. Other than that, I have almost no other complaints about this very engrossing novel that gave me many pleasurable hours of reading and fantasy.

The doctor loved his wife and child. They were the most wonderful thing that had ever happened to him in his life -- especially his daughter, for whom his love bordered on obsession. For them, he would have gladly given up his life. Indeed, he had often imagined doing so, and the deaths he had endured for them in his mind seemed the sweetest deaths imaginable. At the same time, however, he would often come home from work and, seeing his wife and daughter there, think to himself, These people are, finally, separate human beings, with whom I have no connection. They were something other, something of which he had no true knowledge, something that existed in a place far away from the doctor himself. And whenever he felt this way, the thought would cross his mind that he himself had chosen neither of these people on his own -- which did not prevent him from loving them unconditionally, without the slightest reservation. This was, for the doctor, a great paradox, an insoluble contradiction, a gigantic trap that had been set for him in his life.